When I was a little girl, my Uncle Tommy used to take me, along with my brother and sister, to the sugarhouse on his property high in the snow-clad hills. There, the maple trees grew wild, and we could commute back to the house on a toboggan that fit all three kids in a row, crash landing more often than not. 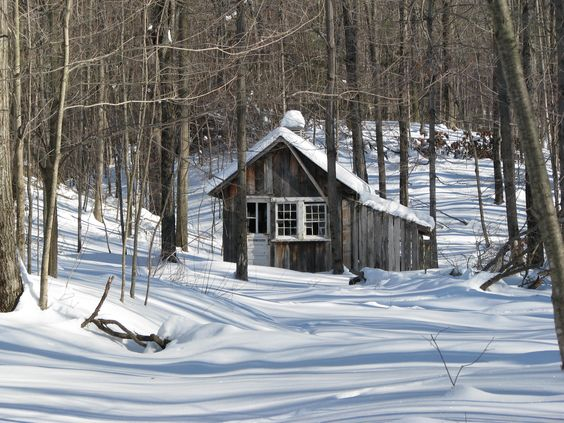 My uncle was deaf from birth, and he always felt most at home in nature, where the communication did not demand words. He loved working the land year round, raising game birds, Irish setters, cattle and crops–but the tail end of winter was a slack time, when everything lies dormant.
Or so we think. People in sugarbush country know that the earth is just waking up from the long cold winter. In late February or March, the daytime temperature creeps above freezing, and the thaw begins. Deep within the heart of the sugar maple, the sap comes alive and runs–at first a trickle, followed by a steady flow, and when the conditions are just right, almost a gush. 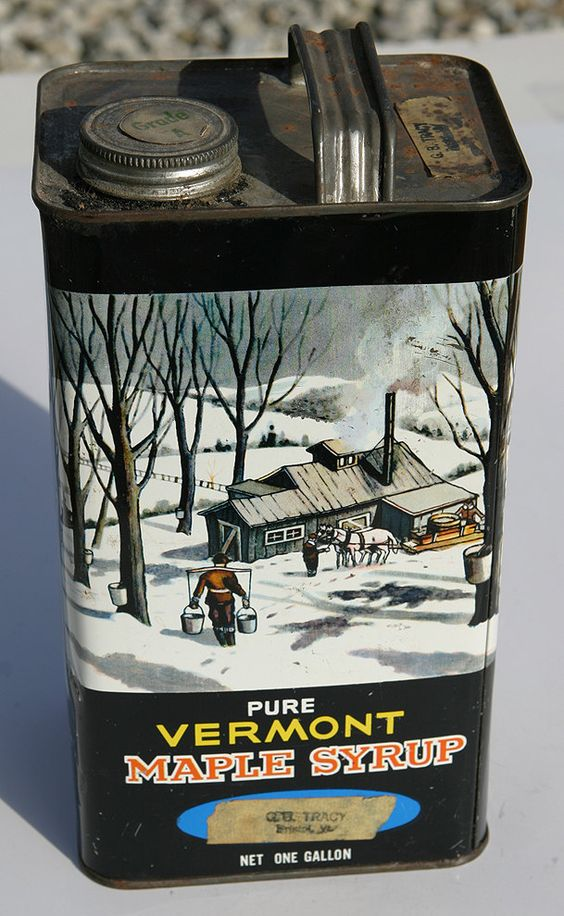 I used to get in trouble for climbing the maple trees, because my clothes would get sticky with sap–but tree climbing never bothered my uncle. He collected the sap in the old way, by drilling a spile (hollow metal spout) into the tree and hanging a bucket to catch the drips. It was probably cold, muddy, miserable work, but I don’t remember that part. I just remember riding through the woods on a stone boat behind the tractor, bringing the tanks of collected sap to the sugarhouse.
That was where the magic happened. A roaring woodfire under the big evaporator pan performed an act of sweet alchemy, transforming the clear, sweetish, watery substance into gorgeous amber maple syrup, bottled in tin quart drums labeled Tee Jay Farms. When the temperature reached its zenith–219F–my uncle would treat us to “sugar on snow”–a splash of syrup on a mound of fresh snow. It would harden instantly into the purest candy you can imagine.
The flavor of maple brings memories of family favorites–iced maple bars, fried doughboys, oatmeal swimming in syrup and maple creme brulee. And memory, any writer will tell you, gives rise to inspiration. I imagined a woman far from home, nearly destroyed by disaster, coming home to a place like Switchback, Vermont, to reconnect, to remember, and ultimately to heal.
My childhood took a turn when my father’s career sent the whole family to live in far-flung places overseas. Those early memories, then, are gilded by nostalgia. In my writing, it’s the backdrop to the deepest and strongest themes–family, friendship, romance, hope and healing. It’s the terrain of the Lakeshore Chronicles, and now Family Tree.
I’ve spent summers on the beaches of Rhode Island, renting a clapboard house with terrible insulation, a faulty propane tank and a dead-on view of Narragansett Bay. Easy friendships revolved around food–lobster rolls from Aunt Carrie’s, clam bakes on the beach, beer and awful music at Schiller’s bar. Readers of Summer by the Sea and Passing Through Paradise will recognize the salty, scenic locale in my fiction.
Somerville, Massachusetts was my home while I was in graduate school. My landlady was a fiery Irish American woman serving a term in the statehouse, and the neighborhood teemed with Italian bakeries and delis–thick, square cuts of pizza, fresh cannoli stuffed with cream, and fried scrod served in paper cones. Steve’s Ice Cream was my decadent splurge. On a chilled countertop, they kneaded the flavorings right into the heart of the scoop. While living in a postage-stamp-sized apartment with a golden retriever and a manual Olivetti typewriter, I had the kind of creative energy only a twenty-year-old possesses. I held down a teaching job, finished my master’s degree, learned to cook gourmet meals on two burners, knitted Fair Isle sweaters…and I wrote my first novel.
A writer’s path is filled with unexpected twists and turns, much like a well-plotted novel. Yet ultimately, we return to the places of our heart–a seaside village, an urban enclave, a moment in time, or a mountaintop clad in sugar maples, with the sugarhouse in the center, maple-scented steam rising from the roof vents, and a warm fire burning deep into the night.