Help me out here, people. For the umpteenth time, I’ve had a note from a reader telling me about an error in my book. Many writers I know, including the peerless Tess Gerritsen, get this kind of feedback.

Now, ordinarily, I love getting corrections from readers because it means that in future editions of the book, I can change, says “commissary” to “dispensary” or put the Pax River Naval Station in the right state (blush).

But quite often, a reader wants to change a word that’s already correct. The latest? Gabbie K. tells me I’ve spelled “minuscule” wrong. She wants me to spell it “miniscule.” Is it because it’s derived from the ancient root “mini” as in, “mini marshmallows”???

And don’t get me started on words that are spelled right, but are perennially misunderstood. There has to be a term for this–words that don’t mean what you think they mean. You know, like toothsome. Ask anyone what she thinks it means. Use it in a sentence, even. “He had a toothsome smile.” Trust me, toothsome does NOT mean toothy. It has nothing to do with teeth. Look it up, I dare you.

And niggardly is not a racist term, although this word is so misunderstood that I’m nervous just typing it. niggardly“>It means stingy, and always has. Out of ignorance, some people think it’s an offensive term. So much so that when I need to say “stingy,” I’ll just say “stingy. Or maybe if I’m feeling daring, I’ll say “begrudgingly.”

Oh, and just so you know–when someone makes a speech and you want to agree with them vociferously, it’s “Hear! Hear!” Not “Here, here,” unless you’re calling a dog. And did you know that if someone was killed by hanging, he was hanged, not hung? And the past tense of sneak is sneaked, not snuck. Check it out, people. You know I’m right.

[Note: Some sites like the New York Times have a  new lookup feature. Select any word, and it will takeyou to a dictionary link.]

Here are a few more “counterintuitive-nyms” for you. Treat this as a pop quiz. Do you know what these words mean, how to use them and how to spell them? If yes, then YAY YOU:

How about you? What are some sadly misunderstood and misspelled words in your writing world?

So I get this letter, hand written in “rage” mode: “I have just finished reading your book…terrible book…this one was awful…At least you didn’t use the F-word every other page…can’t believe I wasted my money…” A whole page of this, and then on the back, she writes:

Just a bit of trivia today, inspired by an letter from a reader. She wanted to know what the heck “branch water” is. She came across the term in The Horsemaster’s Daughter:

Branch water may refer to:

Addition of plain water rather than soda water to a mixed drink (for example, “Bourbon and branch” refers to Bourbon whiskey with plain water)

When a whisky is ‘cut’ (i.e. watered down) prior to bottling, the water that is used is very important to the final product. The preferred source of water is called ’branch water’. Branch water comes directly from the stream that the distillery is built on, some companies even bottle this water, so that bar customers can further dilute their bourbon with the original bourbon water. This branch water starts its life in the underground limestone shelf that exists under most of Kentucky, and part of Tennessee. The limestone shelf acts as a natural filter for water that passes over it. Branch water is particular for its lack of character, with no traces of iron, or other minerals that would be harmful to the whisky making process.

…but that didn’t stop Anna Whitfield from curling up with a good book: http://abcnews.go.com/video/playerIndex?id=6798917  At about the one-minute mark, she can be seen reading a copy of Fireside. My kind of woman!

Sometimes, a perfect stranger sends you something like this in the mail…

Today’s guest blog is from the indomitable Sheila Roberts. Her new book is a guilt-free, no-calorie, sweet froth of a story.

I am constantly in the trenches, fighting the battle of the bulge . . . except for when I take a cake break or make a doughnut run. (Fighting fat is hard work. A girl needs sustenance.) But I’m not quitter. I keep fighting. I even teamed up with my girlfriends Kathleen and Kimberly, forming a diet triage, in an effort to regain my girlish figure. I’m still not there yet, but I have hope. (Don’t ask me how long I’ve been in “I have hope” mode – that might prove embarrassing!) Anyway, all this dieting had to lead to a book eventually.

Hence the arrival of my new book with St. Martin’s Press, Bikini Season, which follows the adventures of four girlfriends who turn their cooking club into a diet club. And each woman has her own issues to deal with. Kizzy needs to find a new healthy lifestyle – not an easy task with her husband, who likes her just the way she is, sabotaging her at every turn. Megan needs to change the way she sees herself if she’s going to change the way she looks. Angela needs to realize that, while she might not like herself, her husband loves her no matter what. And then there’s Erin, who is beginning to wonder if the fact that she’s outgrown her wedding dress could be some kind of omen regarding her upcoming nuptials. I had a great time writing this book, and I’m hoping my characters will inspire me to work harder on getting fit. (If nothing else, the recipes in the book should help.) If you’re fighting the fat monster, here are some diet tips that might help you: 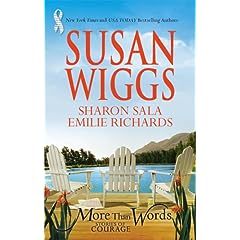 My publisher is reissuing More Than Words and I hope you’ll buy a copy. I won’t make a penny from the sale but I don’t care. This project is more important than book royalties, which all go to charity. My proceeds are for Cottage Dreams, founded by the incredible Seana O’Neill. I’m so glad I got to do this project, and I love the reissue. I adore my two co-authors, Sharon Sala and Emilie Richards. Maybe it’s hormones, but I got all choked up over this reader feedback, sent via my web site. The time stamp was 3:46 a.m.

A contact form has been submitted via the s22529.p716.sites.pressdns.com web site.

comment:        I have had a very stressful year with my 19 yr old
daughter and brain cancer. Reading the More than Words selection
now as I lay beside her. Thank you.You and Fern
Michaels have gotten me thru this year. L** C*******

Note: Cottage Dreams is always in need of contributions. You can donate here. Also, the reader above posted a link to her daughter’s story (via Vanderbilt Children’s Hospital) and a benefit fund for her daughter. Please e-mail me via my web site if you would like to send a contribution there.