A penny for your thoughts

I inhaled this book. My copy of The Penny Tree came in the mail last week, and I took a peek, thinking I’d just sample it and then put it on my TBR pile. Many hours later, in the middle of the night, I was still curled up in my favorite chair, still reading. And when I got to the end, I felt like flipping back to the beginning and reading it all over again. It’s that good. So good that it made me want to take my daughter out into the garden and nail a penny to a tree. So please, treat yourself. Do it now. You’ll thank me.
I first met Holly at the Maui Writers Conference, in the intensive pre-conference retreat. Picture ten writers in a room at a tropical resort, madly reading, critiquing and revising each other’s novels. Okay, don’t picture it. Not a pretty sight, especially because they put me in charge of a group, and I am notoriously messy. 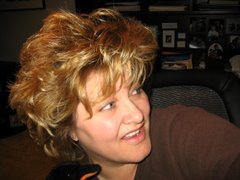 The students in my group that year were talented, intense and driven, but none moreso than Holly. The first thing that struck me was how very generous she was with her fellow writers in the group. But what I remember most of all is reading the draft of her manuscript, a novel called The Tin Box, and getting that twisty feeling in the gut that you get when you realize you’ve discovered something. I was thrilled for Holly, but not at all surprised, when the book was picked up by publishers worldwide and released to great acclaim. Attending the right writers’ conference can be invaluable–believe it.
Now Holly’s third novel, The Penny Tree, is about to be published, yet again to great acclaim. It’s been picked up by foreign publishers and book clubs. If you like really delicious, emotional women’s fiction, this one’s for you. Here’s a brief interview with the always-entertaining Holly Kennedy. She is a kindred spirit, a woman with a great heart, a busy life and a first-class blog. Enjoy!
Q. Okay, tell us what The Penny Tree is all about.
It’s a story about a woman (Annie Hillman) who’s offered a second shot at happiness while coping with the fall-out from her failed marriage. It involves a determined anonymous admirer, a handful of anonymous ads, and the complicated emotional terrain of a family slowly torn apart by their child’s life threatening illness.
Q.  Do you have a Penny Tree of your own?

A.  No, but I wish I’d been given one when I was growing up, because there were times when I sure could have used one!

Q.  Are parts of the story based on real-life events?

A.  Yes, there are a few that were borrowed from my life. For example, at a recent family reunion, one of my nieces walked into a plate glass window at a restaurant, followed later by my husband, who was followed by his father moments after that. To me, it was hilarious, because they were from the same family, and I knew I wanted to use this in The Penny Tree. There are more, but any smatterings of fact have been carefully blended into the story. However, to clarify, I’ve never seen a drive-in movie theater burn down, I’ve never met a crazy woman with a feather duster in her back pocket, and my boys have never shaved their heads (yet).

Q.  Are any of the characters based on people you know?

A.  None of them, although there are coincidences that have been ‘borrowed’ from my life here, too. Unlike Annie, I wasn’t adopted. I’ve never been fired. And I can say with confidence that I’d make a horrible physical therapist. Sadly, though, my nephew was diagnosed with Hystiocytosis when he was three, although he did survive and is now a healthy young man. I have a Newfoundland dog (Sully) and like Annie, I bought my boys goldfish that refused to die, the same goldfish my husband revived with a turkey baster four years later when our air stone tanked.

Q.  Your main character often lacks confidence in her role as a mother. Was this intentional?

A.  Yes, mostly because this reflects how I feel as a mother. No matter how old we get, we never stop growing or changing, and being a mother is a delicate balancing act as you guide these little minds through life, even though yours often needs guidance as well. So to me, making Annie appear wholly confident in her role as a mother wouldn’t make her real.

Q. In the book, it says, ‘Some people meditated or did yoga before they started their day. Others jogged. Annie paddled with her eyes closed.’ What do you do to unwind?
A. I make a double shot of espresso and I write. For me, nothing else comes close.
[Special note to writers: Registration for the Field’s End Writers Conference ends April 24! And to readers: Come see me at the Everett Library on Sunday, April 22, at 2pm.]