We hear a lot about maintaining safety and privacy on the internet, but we’re online anyway, leaving digital footprints everywhere we go. For most of us who have nothing to hide, it’s an acceptable risk. For some, it can be a trap.

If you or someone you know is being abused, support and help are available. Visit the National Domestic Violence Hotline website or call 800-799-7233.

In researching this issue for The Oysterville Sewing Circle, I learned a lot about staying safe.

This site gets it. It’s set up so you can instantly close it, and the “back” button is disabled for most browsers. Most importantly of all, it offers information on how to break free, get help, get involved, and stay safe.

If you’re on the dark path of domestic violence (and remember, “violence” can mean psychological as well as physical harm), make this the first stop on your journey.

That’s what I call my kid’s birthday. Because really, on that day, Mom has something to celebrate, too.

As a mother, I’ve had my moments of pride. But no one’s perfect. For example, what kind of mother would tell her five-year-old, “Don’t interrupt me unless your eyes are bleeding.”? A parenting book will probably advise you that it’s not a good idea to threaten a child.

Yet when Mom is in a creative fog, interrupt her at your peril.

Spoiler alert–it worked. She quit asking for a juice box/game of Chutes & Ladders/help with making a cave for her trolls/practice jumping rope/advice on cleaning Sharpie Marker off the refrigerator door–or any of the myriad concerns of a five-year-old. And I–then a young mother, teacher and newly-published author–did indeed get my writing done for the day in a state of blissful silence. Every work-at-home writer with kids can relate to this moment–being on deadline, caught up in the white heat of creation and desperate to get the story out of your head and down on paper.

Not a spoiler: I love my daughter–my heart, my only child–to distraction. From the moment she was born, I regarded her as a magical creature, a fairy-child given to me by supernatural forces. Some women talk about the pain and terror of childbirth. I remember none of this. I just recall the dizzying joy of holding her, of knowing she was mine.

But sometimes, I just needed her to be quiet and I didn’t always tell her diplomatically.

One day, I emerged from my creative fog to the acute sensation of something is wrong. The house was too quiet. Anyone who has ever raised a child knows the peculiar quality of a too quiet house. There is nothing peaceful about it. This eerie vacuum of silence is the deafening sound of impending doom.

Most days, our house rang with the clamor of doors slamming, dance party music turned up loud and left on, “Chopsticks” on the piano complete with made-up lyrics, and a running stream of dialogue from my only child, who had a lifelong habit of narrating everything she did. In third person. Silence was not normal.

In a mother’s imagination, the world can come to an end in a split second. That’s the amount of time that passes between the realization that you haven’t heard a peep out of your child for far too long, and the gut-deep knowledge that said child is lying blue-faced on the kitchen floor, suspended with her dungarees caught on the jungle gym or drowned in the birdbath. In that split second, you suffer the tortures of the damned, imagining the calamities your helpless offspring has endured while you weren’t paying attention. People wonder why Sylvia Plath put her head on a folded tea towel in the oven while her children slept in the next room. Most work-at-home people have their theories about what drove her to it.

After a panicked search of the house, I found Elizabeth busily putting the finishing touches on a drawing of a girl with curly yellow hair, and bright red teardrops of blood streaming from her eyes.

And not only had she created a devastatingly literal picture of my parenting; she had published a book of her own. I could only hope it wasn’t called Mommy Dearest. While I was struggling with a few pages of my novel, my pre-literate child had written a story, illustrated and self-published it as a book.

Did I melt to the floor with remorse? Ply her with Gummi Bears and extra hours of bedtime stories? No, I puffed up like a tick with pride. Why? Because I felt like a patron of the arts.

Elizabeth made her book out of discarded manuscript pages and the cardboard from a cereal box, stapling it all together. She’d included a copyright page and a title page. The story, written in random letters strung together, was sophisticated beyond her years, giving me a glimpse of a gifted, budding writer. If I’d spent the past two hours guiding and abetting her play, would she ever have created such a thing? Was I right? Was I wrong?

When you’re in the moment, you don’t judge.

I’m not recommending child neglect here. But I do think being overly attentive has its hazards as well. I doubt you’ll read this in any child-rearing book, but I believe there is immeasurable value in showing a child your determination and passion for your art. The smartest, most intuitive creature in the world is a small child. When you issue a threat about bleeding eyes or hair on fire at her, she understands what you’re really saying. And I didn’t only browbeat my kid with threats. I told her other things, too. Like the fact that there are fairies in the yard. Don’t let people tell you those glittering, zooming creatures are dragonflies. They’re fairies. Believe it.

As far as I knew, the art and craft of writing held no mystique for my daughter. It was simply the thing mom did when she was “working.” So I thought, anyway. Then one day, when Elizabeth was about eight, she parked herself beside me as I wrote. By this age, she was capable of sitting still for whole minutes at a time.

I write the first draft of my stories in longhand, using a particular fountain pen with a clear barrel so you can see the ink cartridge inside. After my daughter watched for a while, she asked, “Where do all the words and paragraphs come from?”

Without thinking, I replied, “They’re all here, up inside this pen.”

She studied the pen closely. “I’m gonna need to borrow that pen.”

This is one of the best things a child does–reminds the grown-up to believe in the magic.

This is the balancing act of the working mother. When you’re home with a small child, you get to play all the time. But remember, a child doesn’t see playing as play. It’s simply the thing they do, from the moment they wake up until the moment they fall asleep. So don’t be surprised if your adored, lavishly played-with child grows up and tells you she doesn’t remember you playing with her. Ever.

That five-year-old is grown up now and has a child of her own. I’m not sure what part of the past she will associate with her childhood. The big hair? Leg warmers? Please God, not the shoulder pads. She’s a gifted, natural writer. In her lifetime, she’s interrupted me many times. To date, her eyes have never bled. So far so good.

I love this time of year, because my Inner Irish Girl gets to come out and play. She looks out her window and sees this:

She gets to wear a sweater in the worst shade of green. She eats food in colors not found in nature, drinks beer to match and paints shamrocks on her fingernails. She bakes Skillet Irish Soda Bread, listens to music by the Young Dubliners and invites her friends over to watch Waking Ned Devine and The Commitments.

Also, my Inner Irish Girl gets to tell you about one of her favorite writers and people– Malachy McCourt. I’ve been to many writers’ conferences and sat through many a keynote speech. But there’s one talk that stands out in my mind. It was an address to a huge ballroom full of people, mostly restless, socially-awkward writers hungry to hone their craft. It was a speech about the power of story and the deep well inside the writer, the place you go to again and again, seeking those hidden springs, where everything comes from. It was the kind of talk that makes you jump up out of your seat and rush to find a quiet spot, because you can’t wait to get going on your writing. This talk was given  by Malachy McCourt.

Of all the writers I know, Malachy has the most unique and varied bio. He’s been everything, including but not limited to: bestselling writer, film actor, columnist, theater actor and the Green Party’s candidate for Governor of New York. 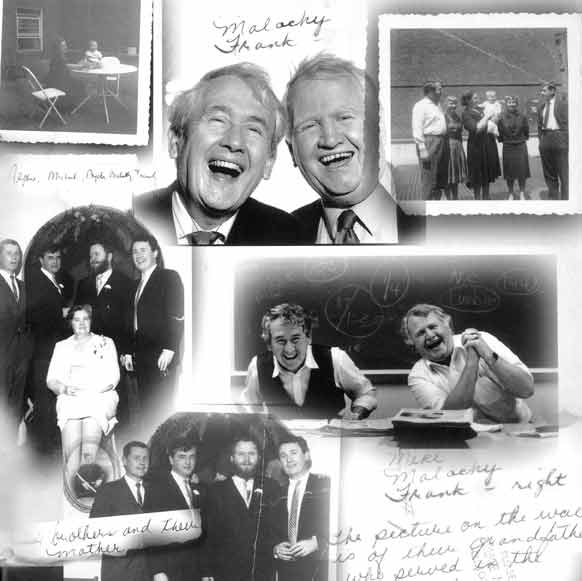 His wit and wisdom know no end. Read his books. Better yet, listen to his audio books. And if that doesn’t convince you, just ask your own Inner Irish Girl or Irishman. It’s no blarney.

Nothing fancy, just a nice recipe for something called Irish Soda Bread. Why’s it called that? Bicarbonate of soda was introduced in the 1840s, and it reacts with the acidic buttermilk to make a fizzy leavening agent. It’s  simple and delicious, so here you go. If you’re like me, you don’t keep buttermilk around so use yoghurt or cream or something, and a squeeze of lemon.

4 cups flour, plus more for kneading

Combine dry ingredients. Cut in butter, add eggs and buttermilk. Stir in raisins. Knead a few times and let rest 10 minutes. * Shape into an 8- or 9-inch round. Score top with a knife in the shape of a plus sign. Place in 9-inch cast-iron pan and bake at 375 degrees until top is brown and toothpick inserted in center comes out clean, 40 to 50 minutes. Remove and cool on rack.

Serve toasted with butter. Try it with a wedge of sharp cheese and a bit of hard-smoked salmon. Good luck!

Speaking of luck, I have written several books about Ireland because I love it there. I love the people and their history and heritage. Irish Magic and Irish Magic 2 are anthologies written with some of my favorite writers–Roberta Gellis, Morgan Llywelyn, Barbara Samuel (aka Barbara O’Neal). The Mist and the Magic (republished as The Maiden of Ireland) takes place in Tudor Ireland. And the late, great Dancing on Air was republished  with a new title: At the Queen’s Summons. Good luck with that, too!

Today, I’m working. The way to get better is to try something that’s hard. The solution to fearing the work is doing the work.