do not accept gardening help from the dogs

Here is a shot of Joan’s bread tag collage, referenced yesterday. Can’t believe I didn’t have a shot of it!

Some stuff I didn’t know about this facet of the process of having your house photographed:
1. The photo shoot crew works their asses off. They showed up bright and early, and worked until after 7pm the first day, and until about 4 the next day. And they are never still. They’re always running around accessorizing everything and composing shots, tweaking the least little thing and even editing a shot on screen. 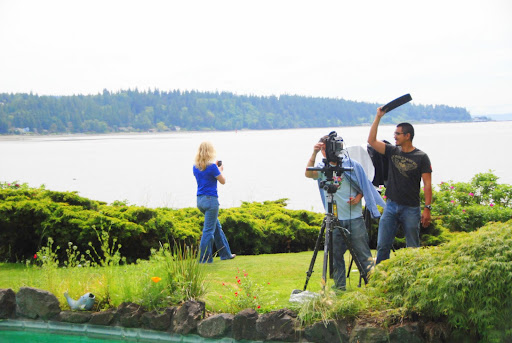 2. They like to eat. I was glad I’d thought to put out muffins and fruit and drinks in the morning. After the first day, I treated them to dinner at my favorite restaurant, The Four Swallows.
3. They do not travel light. They showed up with tons of gear–camera and computer equipment, plus everything Emily thought she might need to accessorize my house and make it look like a magazine house. This includes stuff like shawls and throw pillows, glassware, even food items in interesting packages. She shopped at Restoration Hardware, Kennedy&Kate. When I created the character Olivia Bellamy in the firstLakeshore Chronicles book, I think I was channeling Emily before we’d even met. 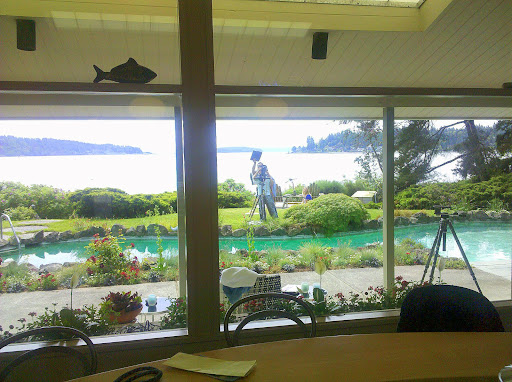 4. God is in the details. A shot is composed like any other creative work, whether it’s a painting or a story on paper. There is nothing randomly placed within the frame. The curve of a horsetail fern (aka weed in my garden) in a vase echos the shape of an arc lamp, or a handbag is placed on the floor just so. One of the most eye-opening things for me was to see the way my own stuff was used–moved from room to room or just rearranged to look more artful. For example, the arrangement on the shelf below is all my stuff, but it’s been moved and made prettier. 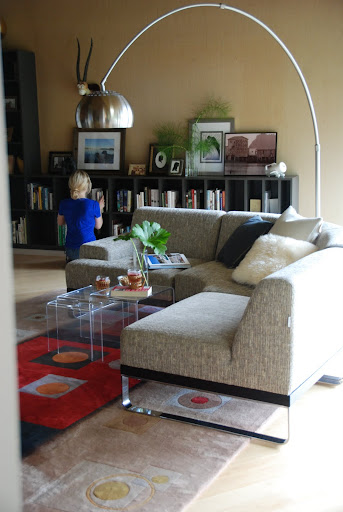 5. The house in the picture is not your house. The stuff in the picture is not your stuff, or if it is, it’s probably been moved to a more picturesque location. Emily totally restyled my lounge room shelves and I kept them that way, because they looked a lot better. I had a bunch of random collected things, and she pointed out that it’s more restful to the eye to see the uniformity of books. I just happened to have a few books on hand. Same goes for the kitchen wall. I had retro fish market posters there, but I prefer the vintage map Emily found in the guest house, and my friend Joan’s bread tag collage. 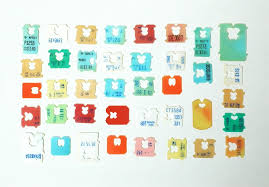 6. If you’re a traveling stylist and photo crew, you are resourceful. Don’t like the bedspread? Flip it over and use the reverse side. Whatever you do, let no cord show. Luckily, Emily and I both love the color blue, so the bedroom turned out great. Even before I upgraded my nightstands.

7. If you have to be in the shot, you’re supposed to look oblivious to the camera and pleasantly happy. I know, it’s completely awkward, especially if you’re a geeky writer with equally geeky writer friends. Hint: To look as if you’re making conversation, say “Watermelon cantaloupe” over and over with different inflections. It will make you laugh and doesn’t weirdly contort your mouth. 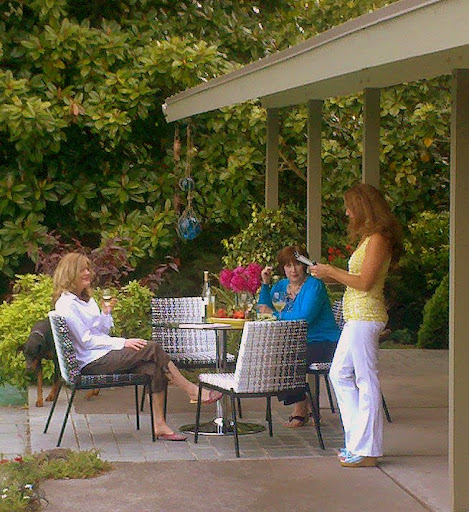 Okay, that’s just seven. Ask me anything you’re curious about it. If I don’t know they answer, I’ll ask the crew, or just make it up. I’m a fiction writer, after all.
Tomorrow: Some very cool things about what made the cut and what didn’t.

HAUNTING JASMINE and THE GOODBYE QUILT!

Are you as addicted as I am to home and garden magazines? God, I love them. There is even a nice name for them in the industry: shelter magazines. You know the ones I mean–Sunset, Coastal Living, Domino…What? Domino has been discontinued? Noooo! Dominoooo! Come back! 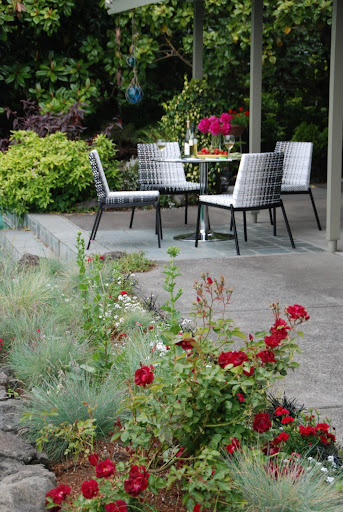 When I page through these magazines, I always wonder, who are these people with their perfect houses? Why can’t I have a house like that?
For one thing, I only ever buy a sofa once every decade or so, and I’m clueless when it comes to accessorizing. Check out one of these magazine spreads and you’ll see, it’s alllll about the accessories. 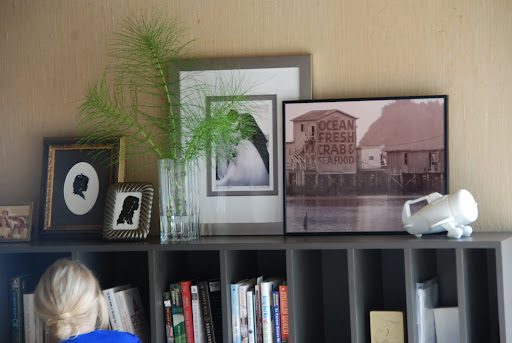 Through a twisty turn of events, my wish was granted. Coastal Living did a spread on my house. And guess what? They made it look like a magazine house! Check out the May 2011 issue and you’ll see.
If you’re like me, you wonder how they pick the homes to be featured. I have a feeling this comes about in a variety of ways, but in my case, it stemmed from the writer’s worst nightmare–rejection. For the release of Just Breathe, ace publicist Kirsten Graham pitched the book to reviewers at magazines all over the place. No takers. Not a one. What’s wrong with these people? Finally, the relentless Kirsten got her foot in the proverbial door. The problem was, it was with a magazine that didn’t run book reviews.

However, they do spreads on people’s homes and lifestyle articles. Bingo, we were in. Because Coastal Living is all about the beach and I happen to be lucky enough to live on the beach. 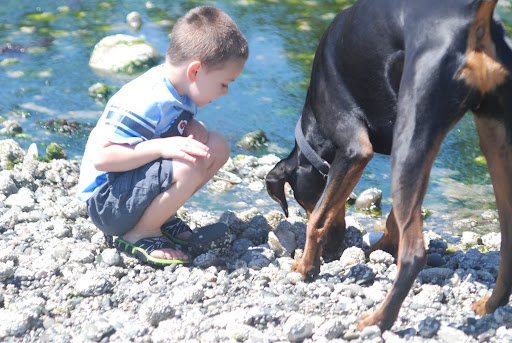 And lo, it came to pass. The magazine would send a crew out to take pictures of me and my home. Freakout time. Remember, I don’t have one of those picture-perfect magazine houses.
Not to worry. The crew includes a “stylist” which a vaguely knew was responsible for helping the photographer compose the shot. 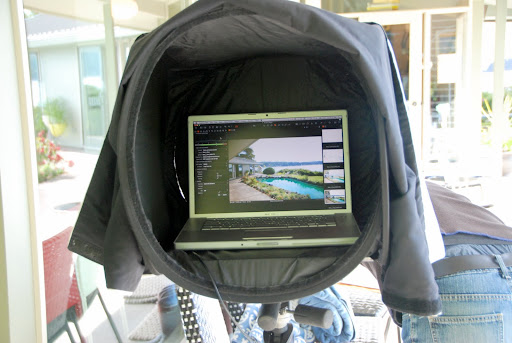 Boy, did I get lucky with the crew who showed up from LA. The master photographer David Tsay, assisted by another photographer, Coy Gutierrez. And the stylist was none other than the renowned Emily Henderson. If you watch HGTV for even five minutes, you’ve seen her. But this was her job before being a design TV star–these magazines take a long time to go to press. Emily was allowed to tell us she was going to be on the show “Design Star.” What she couldn’t tell anyone was that she won the competition and now has her own show. Cool, huh? And, bonus, she is as nice and funny in person as she is on her blog and her show.

Okay, this post is getting too long so I’m going to break it into parts. Coming up tomorrow–10 things you probably don’t know about doing a magazine shoot. With photos, of course.

Join in this exciting NEW event that PAWS of Bainbridge & North Kitsap is doing in May. Purses for PAWS! See note below from PAWS president Mindy Anderson: 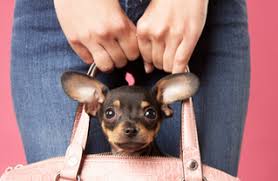 Spend a fun afternoon w/ your girlfriends! You can shop while you sip! A ticket to this event might be a nice Mother’s Day present, too! Since I’m on the committee, I’ve been lucky enough to see most of the items that have come in – WOW….Coach, Gucci, Piero Guidi, Dooney & Bourke, Cole Haan, Ann Taylor, Vera Bradley and many more designer bags…. evening bags, leather, suede, big, small, international, leather, fabric – you name it, we probably have an item that fits your needs! We have only accepted “gently loved” or new items. I am in handbag heaven, let me say! Not to mention the jewelry!!! Oh my, if you can’t tell – I’m excited for 5/15! 🙂

We only have a limited number of tickets – so, don’t wait! And, please feel free to tell your friends. This is a fundraiser – so all your $$ goes to a wonderful cause – specifically the PAWS Hartstone Spay/Neuter Fund (which provides minimal-cost sterilization surgeries for the pets of low-income families).

Below is a link to the website – there are a few items to show you some of the variation. I’ve also attached the advertising flyer (thank you to Barkis’s mom, Susan Wiggs, for being the presenting sponsor!!). Again, feel free to share! We want to sell out and have a successful – and FUN – event!!!! 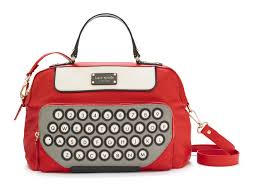